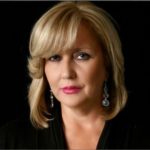 Susan is a National Gold Star Mother and resides in the Suburban Western New York area. The daughter of a Marine, and Army Veteran, She is also the Mother of a Fallen American Hero, Gunnery Sgt, Aaron Michael Kenefick a highly decorated and stellar Marine of over twelve years.

Susan is also known as a Veterans Advocate and a National voice. She has appeared on 60 Minutes, and other national media as well as and Patriot radio. Having worked with various Congressmen concerning our Military and Veterans, she has been sought out by many as the “the Gold Star Mother with a voice” – and “go to person”.