Latest News:
Shifting the Paradigm
We Used AFFF For Everything
To Not “Be Foamed” Was A Dishonor
Like A Fool
California Lowers Response Level for PFOS & PFOA...
The PFAS Action Act Fails to Protect Public...
What’s In Your Water, Pleasanton?
The VA’s “Magic Window”
Beale – Where Cancer Begins
Rocky Mountain Arsenal Exposures
Home Camp Lejeune Contamination Latest Announcement VA a Positive Step for Lejeune Victims
Camp Lejeune ContaminationIn the News 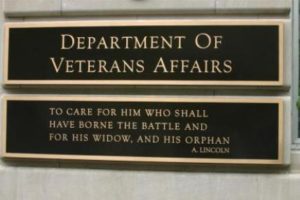 The Department of Veterans Affairs today announced that it will start the  process of amending its regulations to establish presumptions of service connection for certain conditions resulting from exposure to contaminated drinking water at the U.S. Marine Corps Base Camp Lejeune in North Carolina.

“The burden of proving service connection can be a challenge. In such circumstances, Congress and the Department of Veterans Affairs (VA) have relied on presumptions. In the context of VA claims adjudication, a presumption could be seen as a procedure to relieve veterans of the burden to prove that a disability or illness was caused by a specific exposure that occurred during service in the Armed Forces. When a disease is designated as presumptively service-connected, the individual veteran does not need to prove that the disease was incurred during service.”

Establishing presumptive status for various illnesses related to contamination will ease the burden of proof for service members and streamline the process.  This is a positive step for the issue and welcome news.  More to come.

Profile on PFOA, PFOS and PFAS

served in the marines at camp Lejeune for about 4 years.
except for Cuban missle crisis and armed forces expeditionary service. need help for my lung cancer presumed to be service connected. have stage four cancer in left lung. metastisied from right lung were
it received chemo and radiation with lung damage from
radiation.

I belive this is how I contracted toxoplasmosis of my left eye. Had perfect vision my whole life and while I was active. Then shortly after discharge from Camp Lejeune my vision gave me issues and when I finally went to the VA they said it has set it’s course and cannot be fixed. So now I’ve been living with minimal vision in my left eye for the past 7years. I reside in the Tampa, Fl area and was wondering who I could talk to about this. It seems my vision is getting worse, and trying to be seen at our VA is like hitting the lotto. Never gonna happen!

Sorry to Randy, you are certainly not alone my friend. I am confused myself, I have tried and one site successful in trying to organize a protest or march open to all, but lead by the widows and widowers from Camp Lejeune. All can come, and we will stand on the Supreme Court steps, and ask that the Marine Veterans, the civilians, children, unborn who have died from the water, we would also pay tribute and honor those who have passed. The present government is not friendly to Veterans, the VA is seriously broken, and to be honest, not sure it can be fixed. While others may be falling down to get care at the VA clinics and hospitals, I wouldn’t trust them with my cat. My husband died of liver cancer in 2008. I was one of the very few who the VA awarded Widow and Dependent pension. I sent a 10 inch packet to the Washington Navy yard, where it collects dust, As long as I am alive, I want to make sure this does not go the way Agent Orange went, with the stupid presumptive illness, what is wrong with these people the liver and kidneys filter toxins, geez you don’t have to be a rocket scientist to figure it out, but liver cancer not on the list. But, the VA doctor who looked at my evidence and his medical records, wrote something that you rarely see, it was this, It is more likely then not Edward W Hetcher cancer and then death was caused by the toxic waters at Camp Lejeune. That was in 2012, nothing ever happens. When will Veterans, their wives etc, come together in Washington, so that this government hears the cries of the Victims and those that were left behind. When the VA actually makes a connection like in my husbands case, their own doctors, say it, so why has nothing happened, because we are silent, many people don’t even know, that the biggest water contamination in US history, and it is basically ignored by its citizens. We are trying to organize people in every state, to finally come together and say I have had it enough. Its time for women to stand together to honor all Veterans, especially the Marines, who are dying at an alarming rate.