During the first half of 2015 – almost an eternity in American politics – Mike Pence faced a stronger than expected challenge to his Indiana Governor’s seat from Democratic challenger John Gregg, who raised more campaign cash than Pence during the first six months of the year. Analysts speculated that Pence might be in trouble for pushing an extraordinarily conservative social agenda.

Pence turned to wealthy, corporate donors, like Fred Fehsenfeld, owner of the Heritage Group, who contributed $100,000 to his campaign, more than anyone else. The Heritage Group received more than $600 million in work from the state from 2010 to 2015. Heritage Group owns Heritage Environmental Services LLC, one of two Indiana-based hazardous waste treatment companies – the only companies –  that have landed lucrative federal contracts to manage the incineration of the military’s stockpiles of PFAS-laced firefighting foam. The other Indiana firm is Tradebe Treatment and Recycling LLC.

The Pence – Heritage connection became more apparent in June of 2019 when Indiana Gov. Eric Holcomb’s top budget adviser, OMB Director Micah Vincent left his position to become a vice president of the Indianapolis-based Heritage Group. Vincent had been the OMB director since then-Gov. Mike Pence appointed him to the position in 2015.

Heritage and Tradebe have signed contracts with the DOD to incinerate millions of gallons of toxic PFAS-laden fire-fighting foams, sludge, and soils.  In the last few years, the military stopped using two ingredients in the foam – PFOA and PFOS – two of the deadliest varieties of the chemicals known as per – and poly fluoroalkyl substances, (PFAS).   The DOD has been in a rush to incinerate old fire-fighting  foams containing the two chemicals.  Meanwhile, the military has replaced those firefighting foams with slightly tweaked versions, showing many of the same health and environmental risks.

Tradebe is incinerating PFAS substances in the eastern  and central U.S. while Heritage executed a 30-month contract in May, 2019 to handle the incineration in the western U.S.

In August, 2015, the Pence administration’s Indiana Economic Development Corp (IEDC) lured Tradebe Treatment and Recycling LLC to relocate from Illinois to Indiana with $600,000 in conditional tax credits, based on job creation numbers.  The IEDC is governed by a 12-member board, at that time chaired by Governor Mike Pence.  The record of Pence’s involvement with the two companies primarily responsible for incinerating the military’s vast accumulation of these deadly substances is clear. 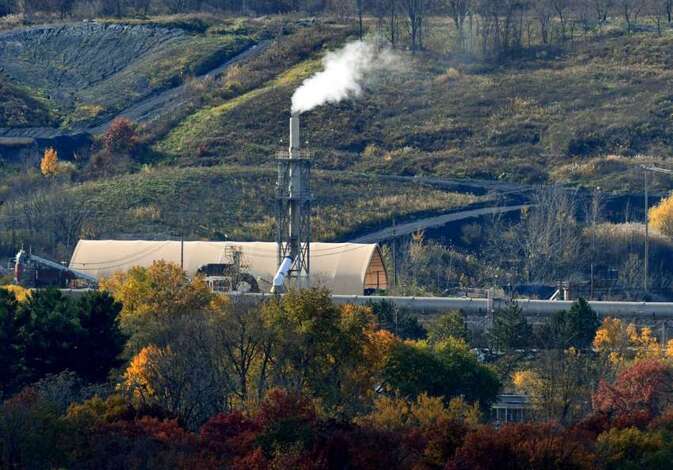 Heritage and Tradebe are sued for incinerating PFAS

Earthjustice filed suit on February 20, 2020 against the DoD, the Defense Logistics Agency, (DLA),  Heritage Environmental Services, LLC,  and Tradebe Treatment and Recycling, LLC.  Earthjustice aims to permanently stop the incineration across the country.

“Incineration does not solve the Defense Department’s PFAS problems; it just pawns them off on already overburdened communities,” Jonathan Kalmuss-Katz, staff attorney for Earthjustice told the Indiana Environmental Reporter. “PFAS chemicals are used in firefighting foam precisely because they don’t burn. Instead of destroying those chemicals, incinerating the foam releases PFAS and other toxins into the air. DoD’s decision to authorize large-scale PFAS incineration without considering the health impacts is shortsighted and illegal.”

The case is set to be heard in the Northern District of California. Incinerating the chemicals requires temperatures greater than 1,832 degrees Fahrenheit, a higher temperature than many incinerators can reach.

​The DLA’s contract requires Heritage and Tradebe to keep quiet about the incineration while the DOD has had no comment on the suit.

PFAS is not considered to be hazardous waste by the EPA, although a growing chorus of academics and lawmakers across the country beg to differ. Subjecting the materials to the Superfund law would require the Pentagon to clean up the contamination it has caused worldwide, an arrangement that will likely cost the DOD tens of billions of dollars, or more.

Soil and water testing done in March, 2020 by David Bond, a Bennington College environmental studies professor and his students, found PFAS in soil and surface water near an incineration facility in Cohoes, New York. The facility is run by Norlite Corp., a subsidiary of Tradebe.

Bond explained, “far from destroying AFFF, Norlite’s facility appears to be raining down a witch’s brew” of PFAS onto nearby areas.”  Bond found PFOS, PFOA, and 8 other kinds of PFAS chemicals mostly downwind of the emissions.

Due to the outcry over Bond’s findings,  Norlite is now banned by the state from incinerating PFAS-laden materials. Waste Dive reported that the New York Department of Environmental Conservation (DEC) order came shortly after the state legislature banned AFFF incineration in Cohoes. That bill is still awaiting Gov. Andrew Cuomo’s signature.

About 2.5 million pounds of waste contaminated with the chemicals were shipped to the incinerator from military installations in more than two dozen states in the eastern part of the US.  The Norlite incinerator had already burned 2 million pounds of PFAS-laden materials when the operation was forced to shut down.

Bond’s research caused a stir, leading the Defense Department to cancel Norlite’s contracts. The incinerator is only 200 meters away from a public housing complex.

The implications of widespread PFAS incineration across the country are frightening, especially during the COVID-19 pandemic. PFAS contamination is thought to contribute to the spread of the virus.

No EPA procedures exist to verify destruction of the “forever chemicals” through incineration and extraordinarily little research has been done on the effectiveness of PFAS incineration. Industry defenders of incinerating PFAS say they are not liable because the substances are not regulated by the EPA as hazardous materials.

Sen. Chuck Schumer (D-N.Y.) asked the EPA to verify Bond’s soil and water test results, but the agency declined. According to Bloomberg Law, the EPA is unsure to what extent PFAS are being incinerated across the country, because the toxins aren’t regulated or documented under federal waste or air emissions laws.  The EPA will not comment.

The Earthjustice suit argues the Pentagon neglected to complete mandatory environmental reviews prior to awarding contracts to the Indiana firms eager to burn the waste at its plants or affiliates.

Earth Justice has identified nine hazardous waste incinerators approved by the DLA to burn AFFF in the eastern region of the US. Most of the locations have abysmal compliance histories:

Wells up to 16 miles away from Chemours plant test...