A new article on water-modeling used to support epidemiological studies at Camp Lejeune has been published in the international peer-reviewed journal WATER. The title of the article is: “Reconstructing Historical VOC Concentrations in Drinking Water for Epidemiological Studies at a U.S. Military Base,” by M.L. Maslia, M.M. Aral, P.Z. Ruckart, and F. J. Bove.

We’ll have a one-on-one interview with Mr. Maslia coming soon to discuss the results and implications.  For now, here’s their article, republished from WATER.

A U.S. government health agency conducted epidemiological studies to evaluate whether exposures to drinking water contaminated with volatile organic compounds (VOC) at U.S. Marine Corps Base Camp Lejeune, North Carolina, were associated with increased health risks to children and adults. These health studies required knowledge of contaminant concentrations in drinking water—at monthly intervals—delivered to family housing, barracks, and other facilities within the study area. Because concentration data were limited or unavailable during much of the period of contamination (1950s–1985), the historical reconstruction process was used to quantify estimates of monthly mean contaminant-specific concentrations. This paper integrates many efforts, reports, and papers into a synthesis of the overall approach to, and results from, a drinking-water historical reconstruction study.

Applying the historical reconstruction process to quantify contaminant-specific monthly drinking-water concentrations is advantageous for epidemiological studies when compared to using the classical exposed versus unexposed approach. 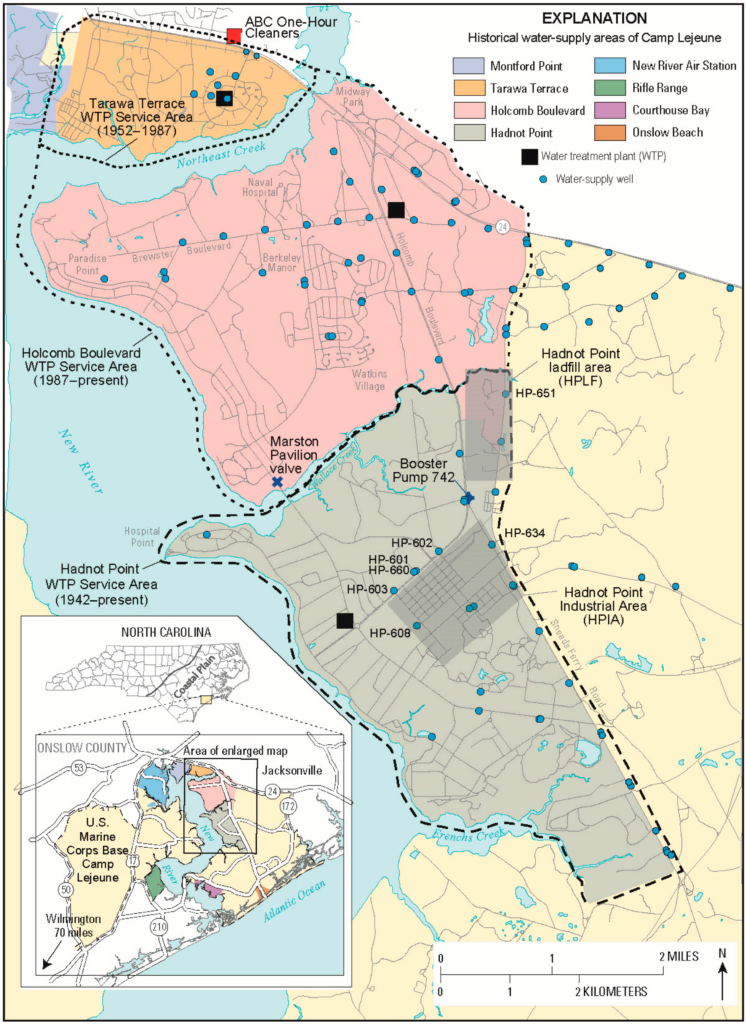 Reconstructed (simulated) and measured concentrations of trichloroethylene (TCE) at selected water-supply wells within the Hadnot Point Industrial Area and the Hadnot Point landfill area at USMC base Camp Lejeune, North Carolina (modified from [1]). 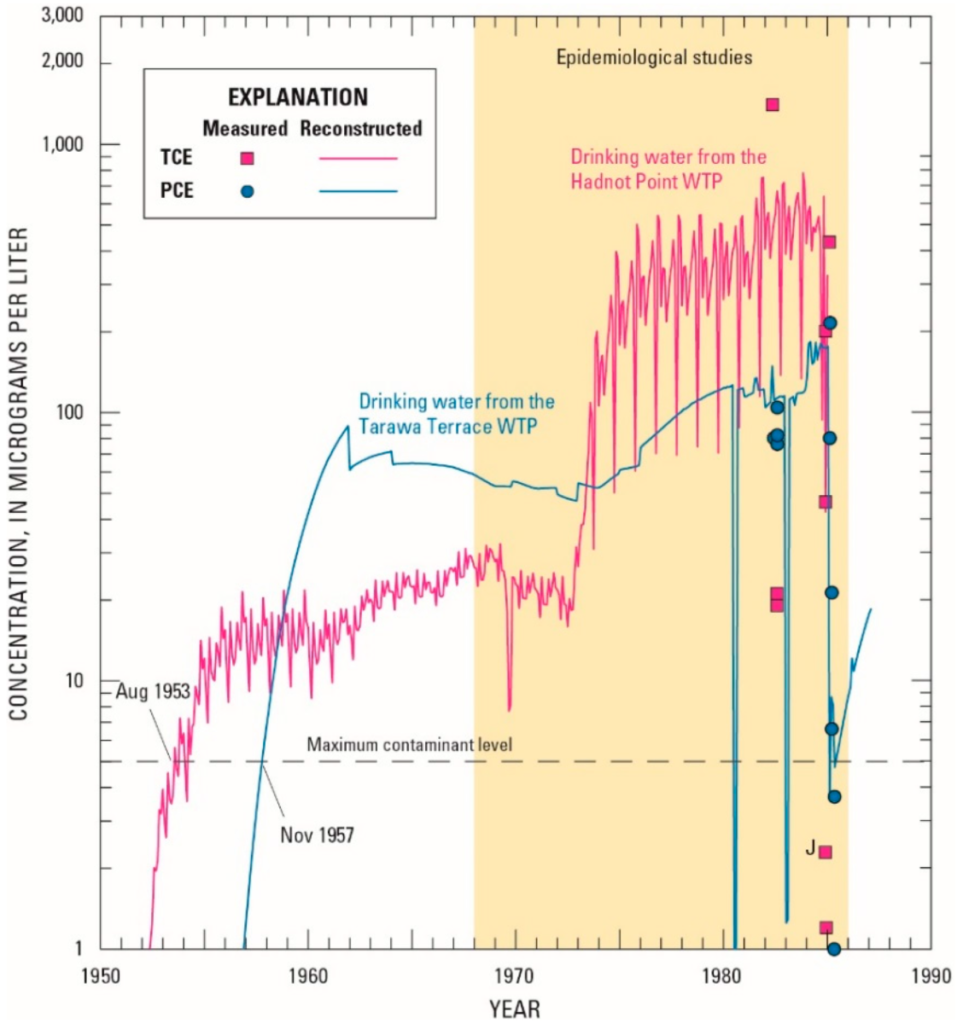 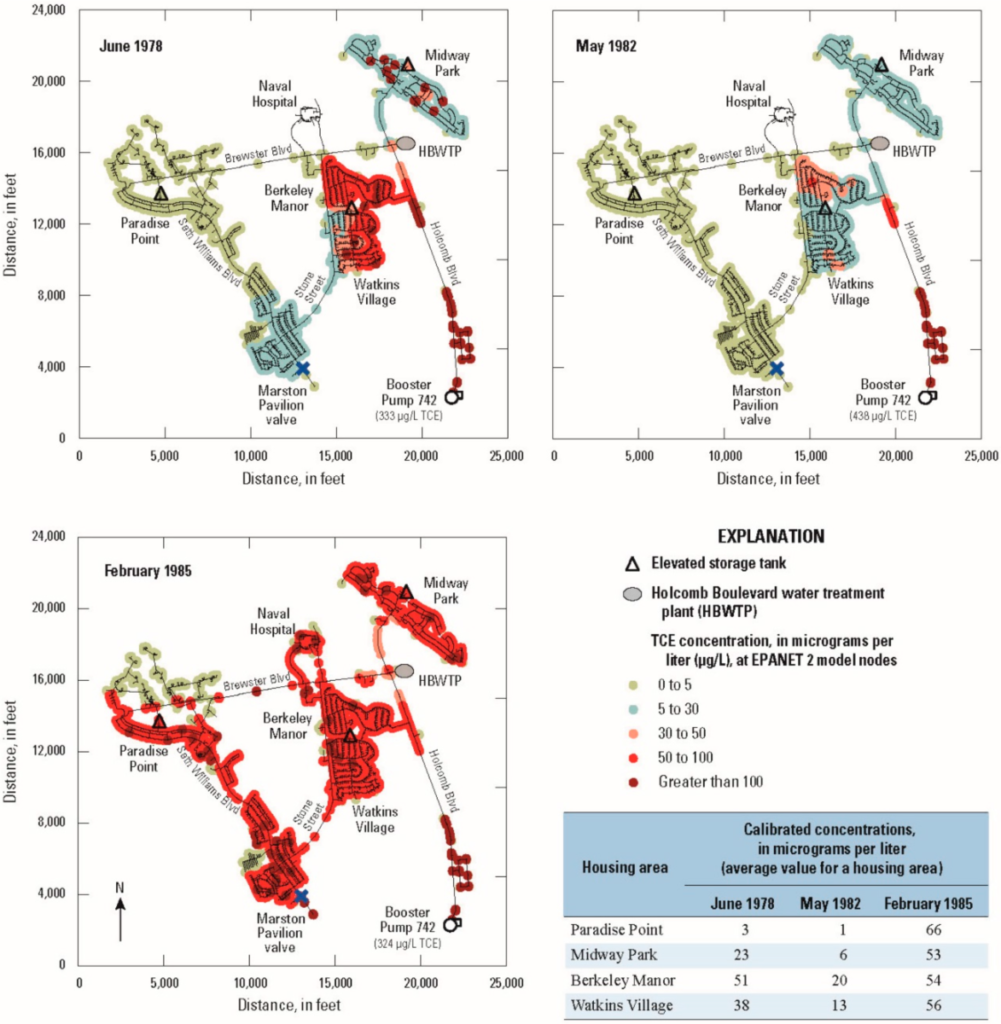 I would like to see the True test on the Camp Lejeune water from 1988-1995.I found Hundreds of infant deaths that are listed during these years. And all died at Camp Lejeune. Many death cert. list the street addresses from T.T. 1 and 11, Midway Park, Camp Geiger all areas of family housing and trailer parks in and motels around Camp Lejeune during 1988-1995. The cut off date is very WRONG! Who came up with this shorten exposure date? Please look at the list on familysearch-dot-org and check for yourself. It’s free, just put in the search bar for years 1988-1995 Camp Lejeune births and deaths. I would like the whole truth to be told.

Please search from 1945-1950 Camp Lejeune infant’s death are extremely high. Today i sent you a list of just Lejeune babies i found during 1945-1950. This should be proof the toxic water start and end dates are way off.

Camp Lejeune: Our Response and Comments to Latest VA Rule