A new base has popped up on the radar lately for various contamination issues – Kadena Air Base in Okinawa, Japan. According to recent reports, the base covered up information about extensive contamination and over a half dozen surrounding communities may be impacted as a result. According to a recent article from Global Research:

“But until now, no one has realized the damage the base has inflicted on the environment and those who live in its vicinity. Documents obtained under the U.S. Freedom of Information Act reveal how years of accidents and neglect have polluted local land and water with hazardous chemicals including arsenic, lead, polychlorinated biphenyls (PCBs), asbestos and dioxin. Military authorities have often hidden this contamination, putting at risk the health of U.S. service members, Okinawan base employees, and the 184,000 Okinawan civilians living in neighboring communities.”

Known as “The Keystone of the Pacific”, Kadena Air Base hosts the biggest combat wing in the USAF – the 18th Wing. It served as an important launch pad for wars in Korea, Vietnam and Iraq. 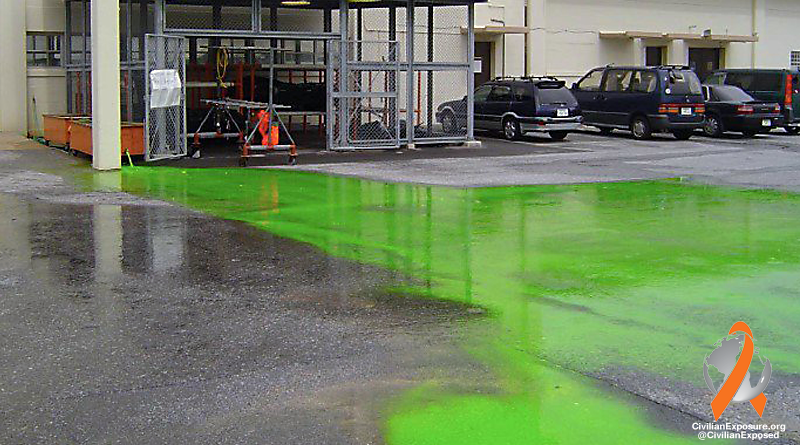 According to the existing Status of Forces Agreement (SOFA), Japanese officials cannot regularly check US base facilities for pollution.  In addition, the US is under no obligation to pay for any remediation or cleanup. SOFA absolves the U.S. of all financial responsibility to clean up contaminated land. As a result, any and all of the costs are borne by Japanese taxpayers.

“In January, the USAF released 8725 pages of accident reports, environmental investigations and emails related to contamination at Kadena Air Base. Dated from the mid-1990s to August 2015, the documents are believed to be the first time such recent information detailing pollution on an active U.S. base in Japan has been made public. The documents catalogue approximately 415 environmental incidents between 1998 and 2015; 245 of these occurred since 2010. Incidents range from small leaks, which stayed within the base, to large spills discharging tens of thousands of liters of fuel and raw sewage into local rivers. Due to its location in densely populated southern Okinawa, Kadena Air Base plays an integral role in the supply of the island’s drinking water. Within the installation, there are 23 wells, some of which contribute to on- and off-base drinking water. More than 300,000 meters of drains carry the installation’s storm water into local rivers – including the Hija River, which supplies drinking water for six municipalities and Okinawa’s capital, Naha.”

In addition to all of the contamination outlined in these reports, it seems that carcinogenic contamination from PFOS (chemicals in firefighting foam) is also showing up at Kadena.  Again, the Global Research report states:

“As well as fuel leaks, the base mistakenly released at least 23,000 liters of fire suppressant foam between 2001 and 2015. In August 2012, a Japanese firefighter set off a fire system in an accident that leaked 1,140 liters. Then in May 2015, a drunk U.S. Marine, released 1,510 liters in an act of vandalism. Such foams can contain carcinogens, chemicals known to cause reproductive and neurological disorders, and perfluorooctane sulfonate (PFOS). PFOS, categorized by the EPA as an emerging contaminant, has recently become the focus of concerns both on Okinawa and in the U.S.“

[…] in May 2016, we wrote an initial report highlighting the various chemicals at Kadena Air Base in Okinawa. These included arsenic, lead, PCBs, asbestos and more. In addition, fuel leaks and firefighting […]

[…] and identify several pollution and contamination issues with bases abroad.  We recently profiled Kadena Air Force Base as just one example, as well as broader stories on Okinawa and an editorial on US military […]