Latest News:
Beale – Where Cancer Begins
Rocky Mountain Arsenal Exposures
The Survey Monkey and the Dog and Pony...
What Can I Do?
Dark Waters
Seeking Solutions That Already Exist
Democrats Cave on PFAS
Our Family’s Ft. Devens Exposures
My Life After Lejeune
The US Military is Poisoning Okinawa
Home Editorial Memorial Day Message
Editorial

As we prepare for the upcoming Memorial Day holiday, we pause to remember and recognize all of our service members, as well as the many civilian workers, families and citizens that support their efforts to protect this great nation.

Not only do we recognize your service, we also understand the generational health catastrophe plaguing so many of you as a result of exposure to poisonous pollution and contamination aboard our U.S. military bases.  We further recognize the ongoing fight for the care and justice all people impacted so truly deserve.

When I started Civilian Exposure as a nonprofit in 2013, I did so for one simple reason. I wanted to make sure that others had the information they needed to have a choice and to take action. As a result, our goal remains to build awareness, seek accountability and promote assistance for all exposed to military base contamination. We seek to bring communities together, exchange knowledge, and challenge the status quo.

Without your help, none of this is possible.

We continue to hear stories daily, not only from Camp Lejeune, but now from all over the country and around the world. Some family stories are truly heartbreaking. The continuous discovery of more contamination news can be both frustrating and, in some cases, infuriating.

On a personal note, I often reflect upon how ironic it is that my father survived fighting on the front lines for the Army in Korea, only to be slowly poisoned to death by contamination by his own government later in life. A loyal civilian DOD employee for 25 years, he was never made aware of the contamination at Camp Lejeune nor was he informed of the potential harm that exposure could cause him.

Our families have served this great nation in many different capacities over the years without expectation in return. Yet, our government remains reticent to accept responsibility or provide necessary assistance for those poisoned on its bases.

All military base contamination victims and their families deserve better.

This Memorial Day, in addition to remembering those lost in battle, let’s not forget those waging battles right now against the many sinister illnesses resulting from toxic exposure.

We cherish too, the Poppy red
That grows on fields where valor led,
It seems to signal to the skies
That blood of heroes never dies.
-Moina Michael, 1915 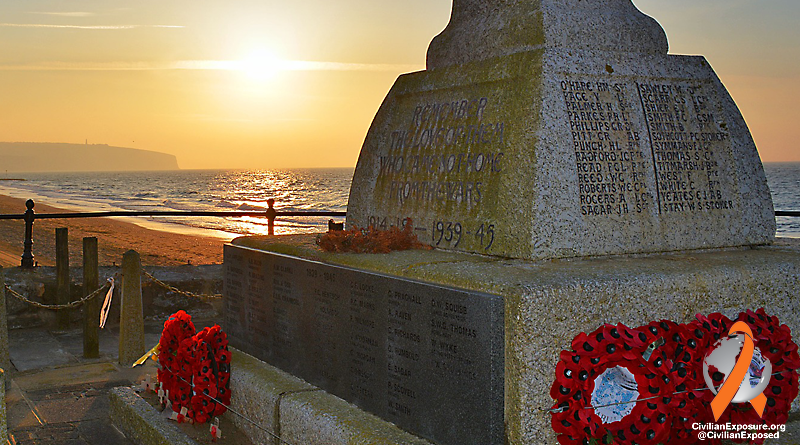 We thank you for your service, your stories, your sympathies, and your steadfast and unwavering support.

I Was A Firefighter Exposed to Toxic Chemicals at Andersen...

Environmental Contamination at US Marine Corps Bases on Okinawa

US Military Returns Land to Japan, but Okinawa Isn’t Celebrating